The heat dissipation afforded by this construction is dramatically superior to standard FR-4 constructions.

The dielectrics used are typically 5 to 10 times as thermally conductive as conventional epoxy-glass and a tenth of the thickness resulting in thermal transfer exponentially more efficient than a conventional rigid PCB.
This is so effective that lower copper weights than suggested by the IPC heat-res charts can be used. 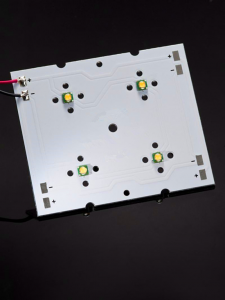